Last week I fulfilled my contractual obligations of bringing a group of students to a UNESCO heritage site in Tanzania; the ruins at Kilwa, which for centuries was the wealth center of Eastern Africa. Traders from the Middle East, India and Europe came to trade their goods for ivory, rhinoceros horns, skins, gold and slaves. (Thank goodness times have changed! Right?)

Our excursion was a photography trip where the students learned the basics of manual photography, and how smart phone cameras still suck no matter what the marketing says. We visited the ruins of two islands and a town built by colonialists, and the students had to create photo essays that tell a story of the region.

The crumbling mosques and the local people were sources of great inspiration for our trip, and so I took my camera along as well. Here are some of the images.

A short boat ride from the mainland, you can see the ruins of this fort as you approach the island. The Portuguese built it; the Omanis later modified it. The door was recently rebuilt. 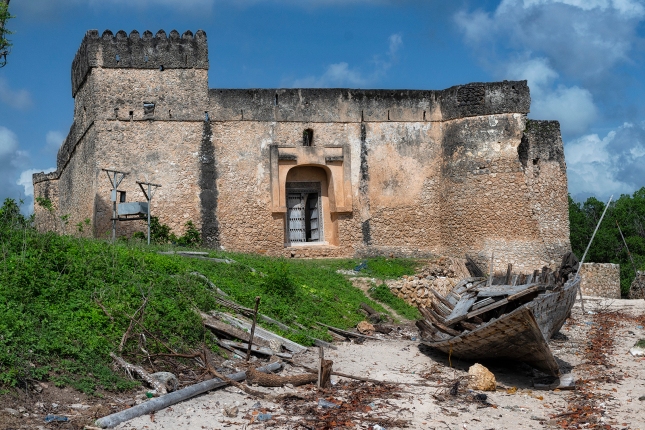 Much of the fort was built with coral harvested from the area about 500 years ago.

The tomb of a 16th century sultan. Even the most powerful of their time eventually fade to obscurity. 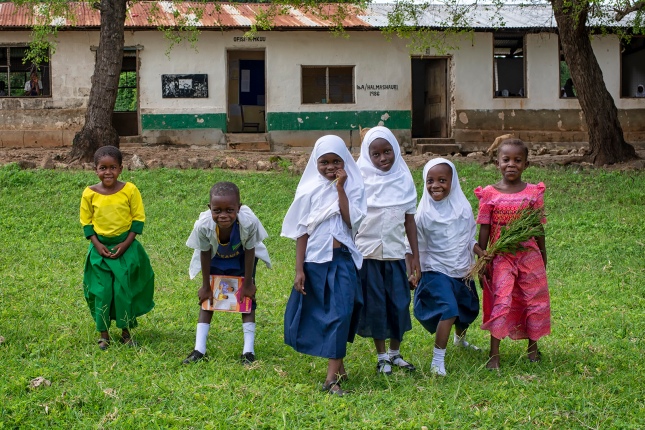 Kids outside of their school.

That Baobab tree is probably as old as those ruins in the background… if not older.

The owner of this kiosk (who kindly let me in to his very small space to take the photo) has a solar panel, which is some of the only electricity in the village. So the villagers pay him 200 Tanzanian Shillings (about 9 cents USD) to charge their phones. 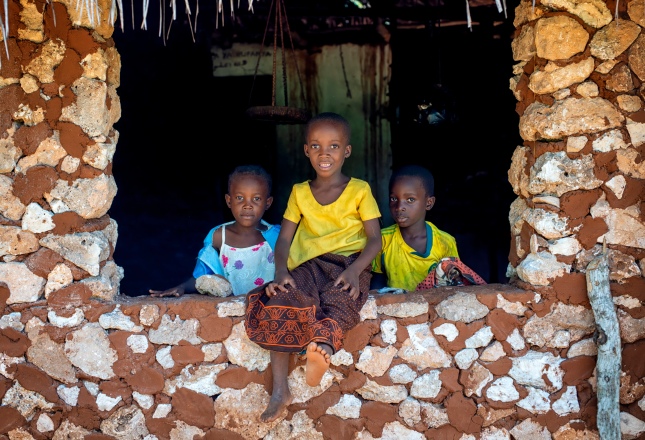 A student with a baobab tree. This one might be a thousand years old or more
(they don’t have rings like other trees, so it’s hard to tell their age). 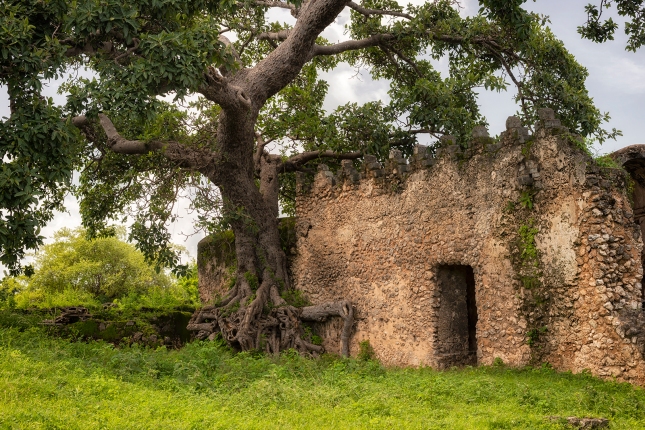 A town built at different periods by Omanis and Germans and also a UNESCO heritage site, little has been done to maintain the town and it is basically in ruins.

The students took most interest in the people of the town, who were very friendly and perhaps used to the odd camera strolling through. It didn’t hurt to keep a few small bills on hand for those who asked for payment in exchange for a photo.

The wall is gone but the root remains. How our cities will look in time. 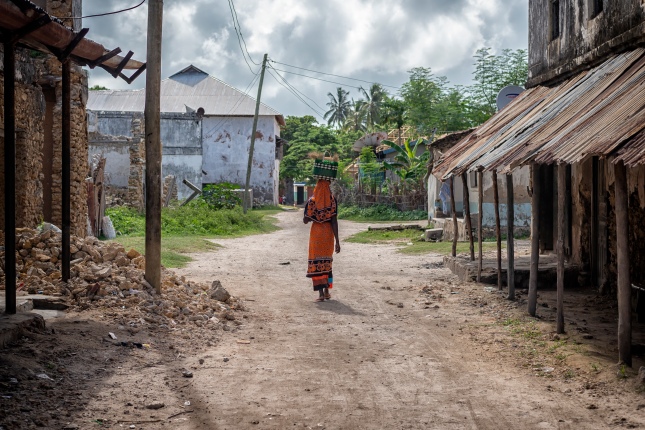 These school kids “shhh’ed” our noisy high schoolers. Rightly so.

The best photo of the trip was of this man, by a student who got a good portrait with a telephoto lens. The light on his skin was beautiful. 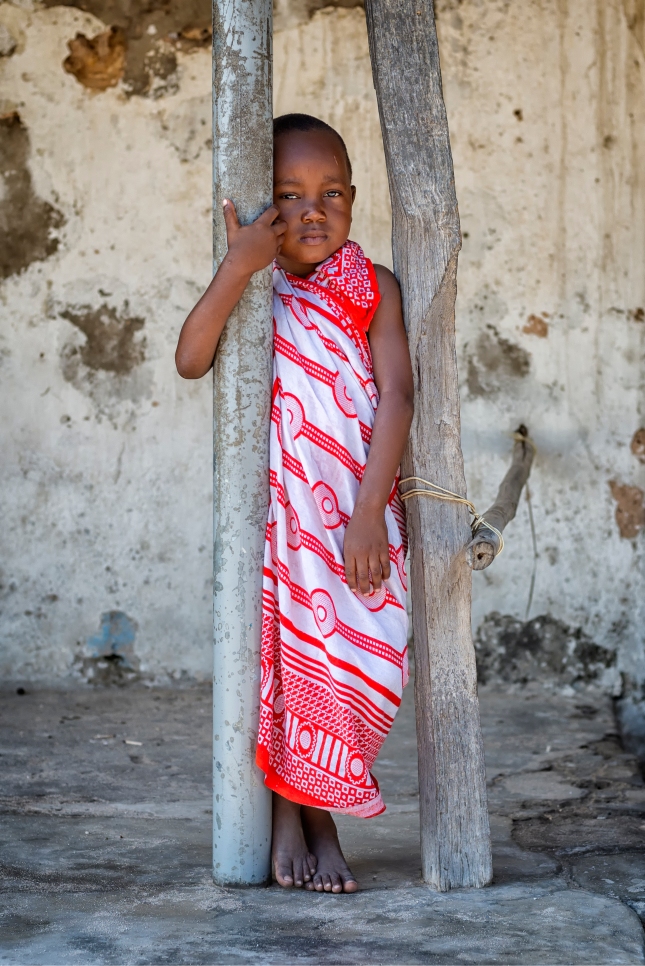 This is Bakari. We thought it was a girl, but were then told Bakari was a boy’s name. Still not sure, but it doesn’t matter. Bakari was extremely coy and kept getting called away by an irritated grandparent, but didn’t listen. Despite acting coy, Bakari appeared in various student photos at an intersection, running in front of a building, and in this spot. We suspected that Bakari wasn’t coy after all, and might be photobombing us all.

A kitten that was asleep on that empty chair bailed as soon as I stopped to take this. It was quite a scene but I got half of it.

By Day 3 we were all pretty tired of walking in the brutal Tanzanian sun (at the hottest time of year) and so I didn’t take as many photos. The second island we visited was a full hour away by boat and contained more ruins from the same era. 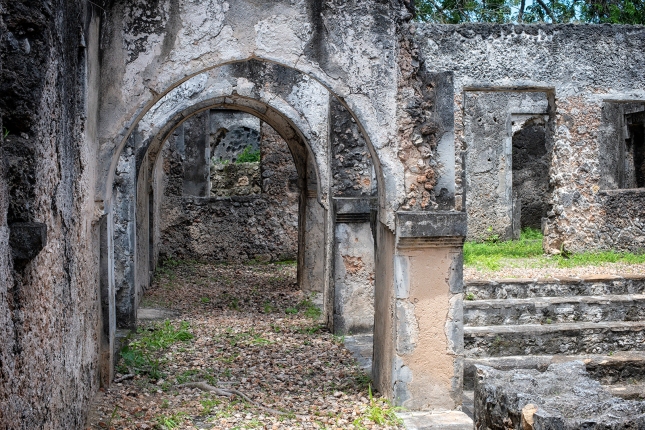 Some rich sultan’s house. Pretty nice if you imagine it in its day. 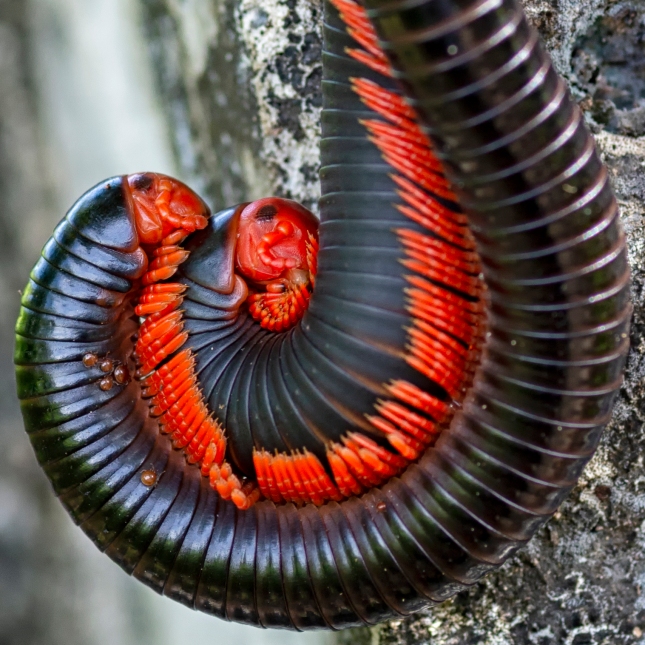 We walked through a murky mangrove swamp to get to our boat.

This was not our boat.

When we arrived at the hotel, I had a quick look down the beach. The sand extended for several hundred meters through a curved fishing community that ended with stone cliffs and houses atop them.

After our first day I was still in the mood to have a look around. The teens elected to stay online in their rooms instead of demonstrating a spirit of inquiry and exploring the area with me. (I found out later the internet didn’t work. 🤣) So I wandered up the beach and slowly had a look at some small fish laying out to dry in the sun, smelling that fishing village smell. I kept my camera down, and knew to just have a look around for the time being.

Eventually I came to a shack (an open wood structure with a corrugated metal roof) where a few men were sitting in the early afternoon shade. They were having a laugh and so I turned to look at them.

“Hello!” One of them called out.
“Habari!” I said in Kiswahili.
“Nzuri, Salaam”.
“Salaam.”
He waved me over. I didn’t want to tower over these men in a straw cowboy hat and aviator sunglasses so I asked if I could sit down. “Karibu.” The man waved for me to take the spot on the dirt next to him. I took off the hat and glasses.

We talked for a while and his English was pretty good. He asked some questions and I asked some questions, and I told him that my interest in the village was due to my own family fishing history in Canada. A few more men came and went (including the village drunk) and we had a few laughs. I told the man I wanted to take photos on the beach and he told me I would have no problems.

Alabama insisted that I also photograph the construction materials in front of him.

I proceeded with respect and caution along the beach, and took photos where I thought I could. 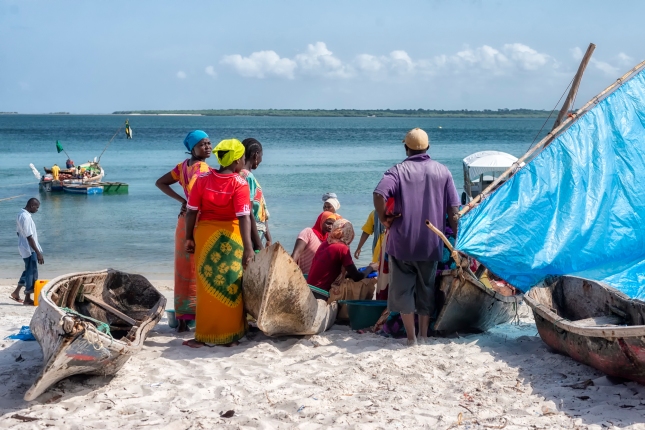 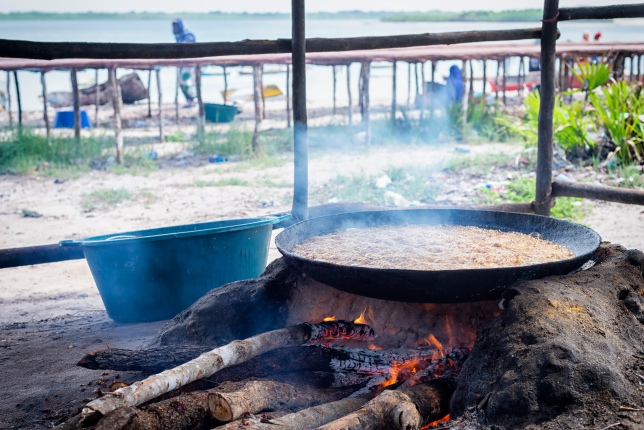 This guy with his boat. I wish I remembered his name.

I had noticed there was a large gathering of people in front of some huts under a large tree. It was some sort of village meeting, and men stood up one at a time in the center of the crowd to have their say. At the periphery of the group, I stood back and watched the scene. In one of the shacks stood a man who wore neat clothing, taking notes on a piece of paper. Finally, he came to the center to talk and it was clear that he was some representative of a local authority.

The meeting seemed tense, and as I found out later, the politician was telling the villagers they could no longer catch the little fish that I had seen drying and frying everywhere. He told them that the small fish were meant to be eaten by the bigger fish, and that the bigger fish were fair game. Nobody seemed happy about it. They were no longer allowed to use nets with smaller mesh and would have to use nets with mesh over a certain size.

As I stood there, a boy had taken interest in me. I was clearly an outsider. He floated around in front of me, looking at me, looking at my camera. After some minutes, I plucked my hat off my head and placed it on his. He smiled. I took my sunglasses off and put them on him. They slid down off his small nose. He pushed them back up and I took this photo.

And those were the highlights of my trip to Kilwa. It was nice to get out of Dar es Salaam for a break. I did not miss the crows.

Here are some nice doves that were on the balcony next to mine.

Posted by Christopher Dwyer on February 18, 2019 in Life Abroad

One response to “Kilwa, Tanzania”